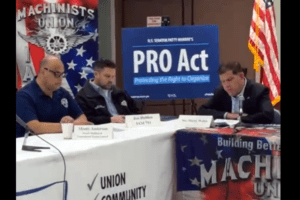 When Secretary of Labor Marty Walsh, Senator Patty Murray and Congresswoman Pramila Jayapal came to the Seattle 751 Union Hall for a press conference promoting the Protecting the Right to Organize Act or PRO Act, 751 leaders also took the opportunity to discuss the importance of the aerospace industry, manufacturing jobs and workers’ rights in America.

“It was refreshing to have an administration and Secretary of Labor who listens and cares about workers. Murray has long been a champion for workers and helped us at 751 on many fronts. Coming from labor, Walsh understands the challenges we face, sees how corporations have overstepped their bounds and trampled on workers’ rights,” IAM District 751 President Jon Holden told The Stand. “Passing the PRO Act would help restore the rights of workers to freely and fairly form a union and bargain together for changes in the workplace.”

District 751 President Jon Holden and 751 Legislative Director Donny Donovan emphasized the important role aerospace plays in not just our state economy, but our national economy. In addition, Holden also talked about the importance of our upcoming contract negotiations in 2024, since it will be our first time back at the bargaining table for full-fledged negotiations with Boeing since 2008 – giving our members collective power to push their top issues. Each of the leaders understood the significant role of American aerospace jobs and ensuring the industry remains vibrant long into the future.

“District 751 continues to speak up about growing the aerospace industry while ensuring workers’ rights are protected,” said IAM Western Territory General Vice President Gary R. Allen. “Their advocacy is not only improving the lives of our members but also workers throughout our nation.”