Your bargaining committee and the company completed week three of bargaining on Friday, September 11. While progress has been made, there are still proposals on the table. It has been a long and grueling process that your negotiators have committed 100% of their time and energy to bring you a fair contract. 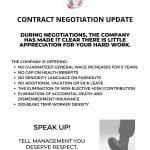 On Thursday and Friday mornings, committee members spent several hours hand billing members as they came to work. The effort was not only to communicate some of the issues that are being bargained, but to get members involved by advising them to voice their concerns to their supervisors and management. These important issues include no guaranteed wage increases over the next five years, no cap on insurance benefits, no seniority on farmouts, elimination of accidental death and dismemberment insurance, no additional vacation or sick leave, the elimination of the non-elective contribution 401(k) and doubling temp worker density. The hand-billing campaign was successful in building support for the negotiations. This support and building of power will be paramount next week as we near closing.

The company is a mirror of its actions at the table and have shown how they value your hard work. We need to judge them by these actions and not by what they say. Actions speak louder than words with regards to your hard work. It’s your labor that has made the company profitable and successful and you deserve respect because of it.

The contract will expire at the end of this coming week so the committee has a lot of work to do. Continue to build support and growth during this time to show the company we intend to fight for a fair contract that reflects appreciation and respect for your continued hard work.