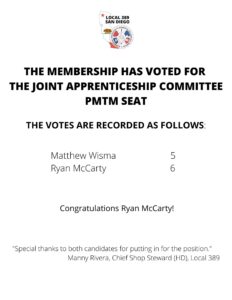 On Thursday, August 4, 2022, the union conducted an election for the precision machine tool mechanic seat that was vacant on the Joint Apprenticeship Committee. Matthew Wisma and Ryan McCarty were both candidates and are both apprenticeship graduates at Solar Turbines. It was a small voting pool and the race was very tight with the decision being handed out by one vote. Congratulations to Ryan McCarty on winning the seat Special thanks to both candidates for running and exercising your union rights. Further thanks to those who voted. Union participation is what makes unions work.