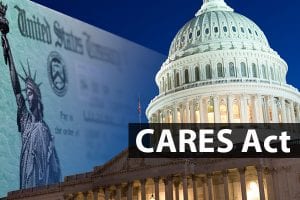 The 600,000-member International Association of Machinists and Aerospace Workers (IAM), North America’s largest aerospace, airline and defense union, applauds the Senate’s unanimous passage of the bipartisan CARES Act. The IAM, along with allies on Capitol Hill, vastly improved the COVID-19 relief bill from its original form to increase investment in the American people and include precedent-setting protections for working people and unions.

READ: Top-line impacts for IAM members in the CARES Act

“Working people can rest a little easier today with the impending passage of the CARES Act. Through the work of organized labor and our allies, massive funds to shore up companies will be allocated once this bill is passed by the House and signed into law. Unlike the bill first proposed by GOP leadership, this is not a blank check to corporate executives or a gift to Wall Street. This vital piece of legislation has strings attached that will deliver a much-needed lifeline to our membership in the aerospace, airline, defense, rail, transit, shipbuilding, healthcare and other industries who are fighting to keep our economy afloat and our citizens healthy during this crisis.

“Thanks to the around-the-clock advocacy of our Legislative Department, we protected our membership from having their collective bargaining agreements abrogated by any company that accepts federal loans. We also insisted on and won strict limits on stock buybacks and dividends, executive compensation and bonuses, and instituted stringent congressional oversight of the pandemic response.

“Our advocacy won $114 billion in relief specifically for the transportation industry, which for the airlines mandates that grant funds be used exclusively for the continuation of payment of wages, salaries and benefits for workers. Our members in the airline industry who work for carriers that accept federal funds are protected from involuntary furloughs and pay or benefit reductions until Sept. 30, 2020. I want to thank Transportation General Vice President Sito Pantoja and his team for the tremendous work they did to protect our members in the airline and railroad industries. I would also like to thank TCU-IAM National President Bob Scardelletti for all his team’s work on rail and transit-related relief.

“We also won significant relief and protections for members in the aerospace and manufacturing industries who work for companies with national security interests. Companies that accept federal funds are prohibited from reducing their workforce by more than 10 percent. Corporations that have between 500 and 10,000 employees are also prohibited from outsourcing and offshoring our jobs and must remain neutral in union organizing campaigns.

“The IAM fought hard for these conditions to apply to all aerospace and manufacturing employers receiving federal dollars, but Mitch McConnell, GOP leadership and their corporate allies torpedoed our efforts. Regardless of whether or not a company is forbidden from laying off workers or outsourcing under this legislation, the IAM will be calling out any company that receives federal support and engages in this activity.

“The IAM will continue to ensure that working people are financially protected while insisting that appropriate safety and health provisions are followed. We will also fight to make sure companies are honoring existing and newly instituted worker protections. We are working with companies to maintain our members’ wages, health insurance, fringe benefits and all provisions in IAM-negotiated collective bargaining agreements.

“Your calls and messages to your elected officials were instrumental in strengthening this legislation. This is what it means to be a part of a strong and united union. Our members are on the front lines of this crisis and the IAM continues to make sure we get the relief we need. Without our strong advocacy for working people, companies would have had free reign to take taxpayer money with one hand and pass out thousands of pink slips with the other.

“Now is the time for us all to join together and take care of each other. Our collective actions will save lives and livelihoods and we have only just begun rescuing this economy. From producing much needed medical supplies to ensuring that our vital transportation, manufacturing, and public and service sectors remain strong, the men and women of the IAM stand ready to protect the health of all Americans, our national defense and lead in the revival of the American economy.”