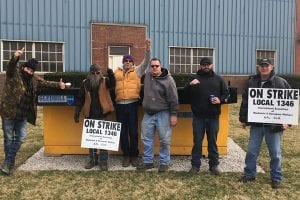 Twenty-three workers of IAM Local 1346, District 54 have been on the picket lines since March 10, after rejecting Gledhill Road Machinery Company’s last, best, and final offer and voting to strike.

At issue are healthcare benefits, wage increases and working conditions that include drastic changes to the attendance policy. The Negotiating Committee invited company representatives to return to the bargaining table in an effort to reach a fair agreement for both parties.

“Our members of Local 1346 have the full support of our district and its affiliated local lodges,” said IAM District 54 President & Directing Business Representative T. Dean Wright Jr. “After meeting with our membership on the strike line, we urge the company to maintain quality wages, health benefits, and working conditions for our members and their families. My thanks go out to BR Jim McClelland and the negotiating committee for their leadership during these negotiations.”

“I’m proud of these members for standing in solidarity fighting for what they believe is just,” said Eastern Territory General Vice President James Conigliaro Sr. “These members work hard to produce a quality product and they deserved to be compensated fairly for that work.”