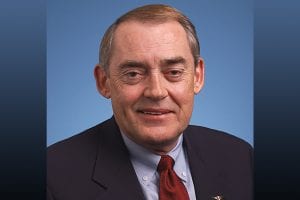 It is with a heavy heart that we announce the passing of our brother and friend, Richard “Dick” Schneider. Brother Schneider peacefully passed away the evening of March 17, 2020, at the Portland Adventist Hospital. A celebration of life is to be planned sometime during the summer.

Dick initiated in 1968 as a member of the IAM and one year later transferred his membership to Local Lodge No.63 when he moved to Oregon and began working at Portland Iron Works. During the next nine years Dick served the membership in a range of positions including Shop Steward, President of the Shop Stewards, Negotiating Committee Member, Local Lodge Vice President and delegate to various councils, including serving as a delegate to District Lodge No. 24. During this time, Dick also took advantage of attending various Shop Steward and Leadership Schools.

On September 5, 1978, Dick was hired as a Business Representative for District Lodge No. 24. Included in his duties was the servicing of a diverse category of shops, including negotiating collective bargaining agreements and the handling of grievance through the arbitration process.

Also during this time, Dick serviced as Trustee of the Oregon Marie Machinists Health and Welfare Trust, Secretary-Treasurer of the Machinists Non-Partisan Political League of Oregon, as well as assisting in the organizing of several new shops.

Dick Schneider was appointed as a Grand Lodge Special Representative for the Western Territory by General Vice President Justin Ostro on October 1, 1988.

On April 1, 1990, he became a Grand Lodge Representative with duties that included NLRB work, and responsibility for several contracts.

General Vice President Lee Pearson then selected Dick to become his Administrative Assistant on July 1, 1996. He held that position until November 30, 1997, when International President R. Thomas Buffenbarger appointed him to serve as Aerospace Coordinator for the newly formed IAM Aerospace Department. Dick retired from the IAM in 2007

“Dick was a True Journeyman and a Fighting Machinists to his core. His contributions paved the way for Countless families to have an improved standard of living said General Vice President Gary R. Allen. “On behalf of the Western Territory I extend our sincere condolences to Dick’s wife Kathi and his entire family.”

“Anyone who worked with Dick Schneider knew how dedicated he was to this union,” said IAM International President Robert Martinez Jr. “For nearly 40 years he was active in the IAM, and his leadership skills became obvious early in his career. He will be missed by us all.”